Grand Handicrafts is the international wholesaler of Iranian handicrafts. In this article, we will explain what enameling is and how it is done.

Enameling or Minakari is an astonishing and eye-catching art, dating back to 5 thousand years ago. Enamel is the art of decorating dishes by heat and painting by artists.

That is why it is known as the art of earth and fire. But what is the secret behind this marvelous art?

The meaning of Minakari

The closest meaning to the word enamel is blue sky. The background color of the motifs is usually blue, green, and sometimes red. Therefore, if we look at the Minakari painted dishes through the eyes of art, it is reminiscent of the beautiful blue sky. Maybe that’s why it is called Mina Kari

Minakari has been done on silver, gold, brass, and copper dishes by ancient artists. Today, since copper is more economical and flexible than other metals, it is the most dominant metal in enameling.

The history of Minakari

According to some experts, following the adaptation of Byzantine Minakari to the Iranian works of art, Persian Minakari was invented in Iran and then spread to other countries such as China and Japan via the silk road.

Isfahan is the breeding hub of Minakari Irani. The prevalence of Minakari Persian Enamel in Isfahan dates back to the Pahlavi era, around 1931. However, the art has been flourished during the last thirty years by Mr. Shokrallah Sanizadeh, one of the prominent Iranian artists.

The color and design of Isfahan Minakari have a special attraction for Iranian art lovers and foreign visitors as well.

The materials used in enamel are sand or flint, red lead, soda, or potash which are melted together under intense heating. The result is a transparent glass called flux which is the foundation to produce various colored enamel.
The flux is then combined with different metallic oxides to create colored enamel.

The first step in producing enamel work dishes is to make the desired container such as plates, bowls, pots, jars, pots which is done by the hand of prominent coppersmiths.

In the next stage, to prepare the enamel dishes for painting, they are glazed. For this purpose, they are sprayed by a special glaze paint 3 or 4 times and placed each time in the oven or kiln at a temperature of 750 to 800 degrees to fuse properly.

After that, the artist paints the glazed dishes with special enamel color, while creating different shapes and patterns such as arabesque, Khatai, flora and fauna, hunting scenes, etc. 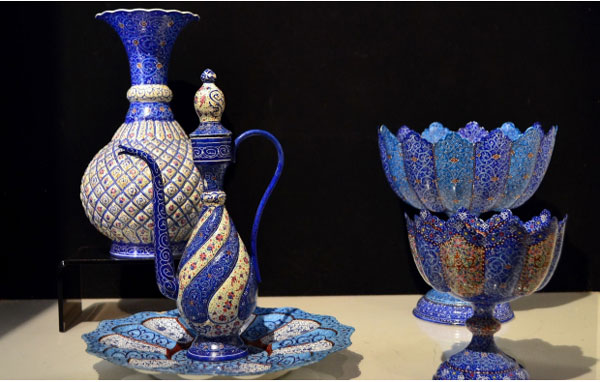 In the final stage, the dishes are back into the oven at a temperature of 600 degrees to fuse properly with the colors. Then they are withdrawn and cooled at room temperature.

This step is very sensitive. If the enamel is pulled out of the kiln sooner, it will lose its glowing appearance. On the other hand, if the enamel is left in the oven for a longer period, it will burn and become dull.

Check out the very best selection of our minakari. There are various types of minakari for sale available now. We also suggest that you see persian minakari tea set