Meenakari art , also known as Enamelling, is a form of fire that is used to decorate metal and tile with mina glaze. Enamelling, or Minakari, is the art of painting, coloring, and ornamenting metal surfaces by fusing vivid colors over them in a complex design.

Mina is the feminine version of Minoo, which means heaven in Persian. Mina is the color of heaven, which is Azure.

What is Meenakari art , and how does it differ from other forms of art? What are your impressions of Minakari meaning? In Farsi, the word “Mina” means “blue sky.” It’s also linked to the name Minoo, which literally means “heaven.”

In its numerous layers that appear to be advancing towards eternity, the handicraft embodies the azure of the sky. One of the reasons for the artwork’s name, mina, or “representation of the sky,” is that it is a portrayal of the sky.

Enameling, also known as vitreous enamel or porcelain enamel, is the closest counterpart to this type of art. Enameling can be done on a variety of materials, including metal, stone, glass, ceramics, and pottery.

Enamelling, also known as Meenakari art , is the process of painting, coloring, and ornamenting metal surfaces by fusing dazzling colors over them in an elaborate design.

One of the famous courses of art in Esfahan is enamel works and embellishing metals with colorful and baked finishes. Mina is a glass-like colored coat that can be solidified by heat on a variety of metals, particularly copper. Meenakari art, also known as Enamelling, is a technique of fire that is used to decorate metal and tile with Mina glaze. 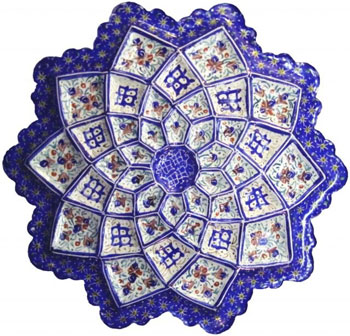 Have you ever seen layers upon layers of the sky unfolding across the surface of a work of art? While the sky’s azure cascades in concentric circles, beautiful flowers and enigmatic birds arise in ever-changing patterns of heavenly loveliness.

This is a Persian language art style known as Iranian Meenakari The importance of this Iranian handcraft stems from the complexities of Iranian art and culture, which have been embraced by the country’s long history. This post is for you if you want to learn more about this amazing Iranian handcraft.

A piece of mina item requires a great deal of precision and taste. A piece of mina must be molded to fit the design that will be imprinted on it later by an artist’s hands.

Furthermore, it must be constructed to be long-lasting, as heat can damage the object or cause the designs to come apart. As a result, Meenakari art and products are classified as decorative art or art that is taken out of Iran as a keepsake.

Meenakari are the result of eyes that glimpse the depths of the sky, adore the beauty of the world around them, and capture the harmony of heaven and earth in one piece. Come to Isfahan and take a piece of art home with you. Isn’t it like you’re holding the entire universe in your hands? 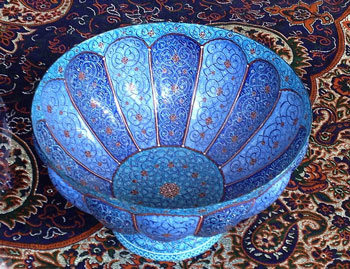 Meenakari art, also known as Enamelling, is a form of fire that is used to decorate metal and tile with mina glaze. Enamelling, or Meenakari , is the art of painting, coloring, and ornamenting metal surfaces by fusing vivid colors over them in a complex design.

Mina is the feminine version of Minoo, which means heaven in Persian. Mina is the color of heaven, which is Azure.

This art was created by Iranian craftsmen during the Sassanid era, and it was carried to India and other nations by the Mongols.

Jean Chardin, a French visitor who visited Iran during the Safavid dynasty, mentioned an Isfahan enamel work with a pattern of birds and animals on a floral background in light blue, green, yellow, and red. Isfahan, a lovely city, is known for manufacturing Mina crafts as well as other crafts such as Ghalamkar, miniatures, and carpets.

Shokrollah Sanizadeh, whose ancestor was a renowned painter, and his student Mr. Gholamhossein Feizollahi, who is noted for designing amazing designs, are two of Isfahan’s greatest masters of enameling.

What do you know about Meenakari art history?

Meenakari art, according to some, has a 5000-year heritage. Experts believe that this art originated in Iran, as evidenced by comparisons of Byzantine enamel and Iranian works. Then it spread to other countries.

There are several works in Europe that have a very long history among them. Six gold rings, for example, from the 13th century BC in Cyprus. Furthermore, the famous Greek statue of Zeus, which dates from 500 BC, bears the same workmanship.

Nonetheless, experts believe that the origins of this art can be traced back to Iran and Persia. While enameling extends back to the earliest civilizations in human history, such as the Egyptians and the Roman Empire, Meenakari is believed to have originated on the Iranian plateau at least five thousand years ago.

Numerous pieces of jewelry and artifacts used for decorative arts glazed with enamel and Meenakari art have been discovered in various regions of the world, attesting to the handicraft’s long-standing appeal. The first instances of Meenakari art are from the Achaemenid era.

Even though there is evidence that the artwork was created in subsequent centuries, it was only during the Seljuk dynasty’s reign (early 12th century) that this form of art began to flourish.

How to identify the original minakari products?

Which Iranian handicrafts are offered in the online store?
Scroll to top
× Free consulting
To download the products catalog, please enter your phone number.
×
download catalog