What are the famous traditional handicrafts of Iran? Handicrafts originate from the cultural and artistic antiquity of each region and are a symbol of customs, traditions, values ​​, and lifestyles in that region. For the production of handicrafts, there is no need for advanced technology and technical knowledge of foreign experts, and the knowledge of its production is transmitted locally and from generation to generation. Due to its special characteristics, traditional handicrafts of Iran have become an art industry that is associated with low investment and high profitability in domestic and foreign markets.

Metal handicraft is one of the traditional handicrafts of Iran. Metalworking and related arts, from ancient times to the present, have produced valuable works such as Lorestan bronzes, Achaemenid ornaments and garments, exquisite golden plates, and Simin Samani, unique works of the Islamic era, bronzes, and latticework, which are striking and unmistakable. Blessed has provided.

Metalworks are divided into drilling, laminating, bending, and based on the type of construction, which is fully introduced in the metalworking art page. Also, different decorations are made on each of them, which have different methods. Engraving, gilding, tapestry, turquoise, engraving, locks and fittings, jewelry making, knife making, MinaKari.

One of the most important examples of metalworking during the Achaemenid period is a golden vessel with a pair of handles in the shape of a winged antelope, which is one of the prominent and valuable metal works of the Achaemenid period. Another use of metal is coinage, which has been common since the Achaemenid period and has undergone many changes in the historical process. Also, making jewelry has always been of special importance, which has been common in Iran since at least the second millennium BC, which was used in the form of precious metals and precious stones. In the evolution of this art, the art of tapestry should also be mentioned, which probably dates back to the Median and Achaemenid periods, which used gold and silver wires. 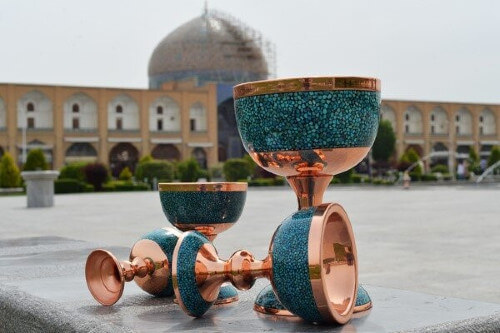 As mentioned, the production of utensils from precious metals has made great progress in the Achaemenid and Sassanid eras. One of the most famous metal utensils of the Sassanid period is “Khosrow Cup”. With the advent of Islam, bronze replaced gold and silver for a long time, and metalworkers continued to use this alloy to make utensils such as trays, jugs, and drinkers in the shapes of animals and birds. With the rise of the Seljuks in eastern Iran, the glorious era of Islamic metalwork began. In this period, most silverware (especially made in the fifth and sixth centuries AH) has special values.

MinaKari is also common in this period. Along with the bronze works, exquisite works appear. Iranian metalworkers also achieved great results in making latticework and latticework and skillfully made utensils such as candlesticks and incense burners, which were made in the shape of animals and birds. Bronze work with silver and copper processing also gained special importance and prestige in the fifth and sixth centuries, and metalworkers completed the processing of bronze objects with other metals. 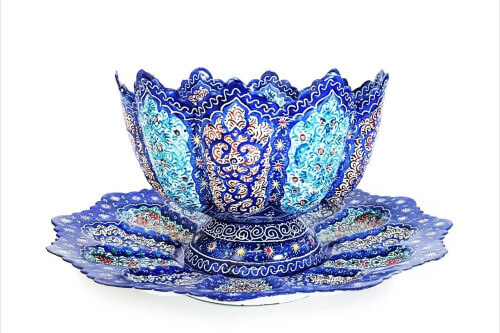 The word literally means Mina, glass, or cup. MinaKari also refers to the art of using blue glaze to paint patterns on dishes. This Iranian art can be seen in the doors and windows of religious and old places. The city of Isfahan is one of the main centers of activity for pottery artists; Therefore, a large number of MinaKari workshops can be seen in this city.

This art is called the art of accompanying color and fire. These two elements are the basis of the MinaKari work of decorative utensils and utensils. In addition, other tools such as pens, hammers, sheet metal, etc. are needed to implement MinaKari in various ways. Using these tools and using their own taste, artists create new and special designs on dishes.

Patterned blue plates and cups are the first image that comes to the mind of many after hearing the name of MinaKari. Dishes that have decorated the homes of many Iranians in the past. These dishes have been produced for more than 5,000 years. Due to their material value, until now only kings and courtiers owned these vessels. Now, however, it is one of the valuable traditional handicrafts of Iran and has many buyers. Isfahan has become the center of this art for many years and many artists are working in small and large workshops of this city. 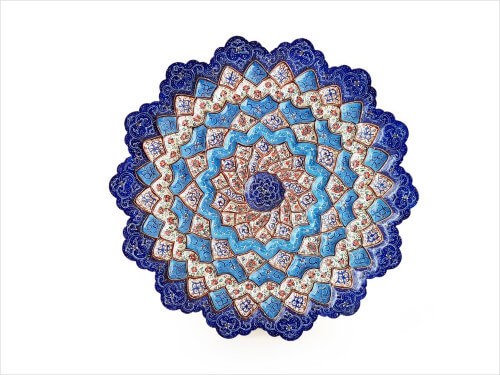 Various examples of these traditional handicrafts of Iran have been found in different parts of the world. These include the six gold rings in Cyprus and the statue of Zeus (King of the Gods in Greek mythology) in Greece. However, many examples in Iran have led experts to claim that the root of this art was the land of Iran. Later, through wars or trade, the art spread to Europe. Earrings, gold bracelets, and a brass bowl all MinaKari are examples of this art discovered in the Achaemenid period. These works are kept in world-famous museums and their authenticity has been confirmed.

The most famous work of pottery discovered is now in the Boston Museum of Fine Arts in Massachusetts, USA. A silver tray is called the “Alb Arsalan” tray. The name of its creator, which is engraved in Kufic script on the work, is “Hassan Al-Kashi”. Experts consider this work to belong to the Seljuk period. MinaKari is an art that is done on metals such as gold, silver, and copper. High heat is used for this purpose. In the past, this art was mostly done on gold and silver. 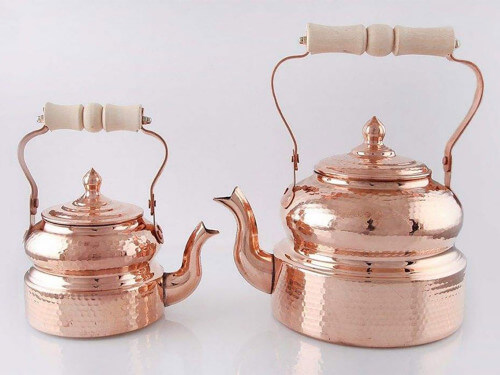 According to archeological documents and evidence, the use of copper dates back to 9500 BC and before the 5th millennium BC (discovery of copper smelting) it was used in pure form and the cold hammering method was used to shape it. Today, based on the undeniable evidence found from all over Iran, the north and center of Iran can be considered one of the oldest metalworking centers in the world, and Iranian metalworkers are among the pioneers in the discovery of copper smelting in the ancient world. The point is. Copper metal is a malleable metal, malleable, with the ability to penetrate and wire and perform various decorations such as lattice, engraving, engraving, metalworking, decoration, and carving, etc.

Copper, which has long roots in Iran, is among the traditional arts. The so-called person who performs this traditional art is called a blacksmith or craftsman. In coppersmithing, the master-worker uses a hammer and various other tools to make many dishes, including trays, pots, pitchers, basins, sunshades, and so on.

Mesgari, which has been rooted in Iran for many years, has involved various cities. Cities such as Isfahan, Kashan, Shiraz, and finally Kerman are among the most important areas in which various workshops are operating in the field of coppersmithing. 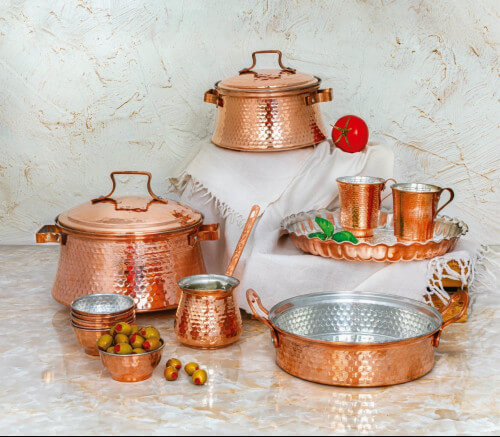 Yazd has also been one of the important cities in the prosperity of this art. In such a way that a bazaar called Panjeh Ali has been operating only in this field and its antiquity has been around for about 600 years. For this reason, many dishes are made in this coppersmith market every year, and many of them are known as superior work, and the more delicate type is used as a decorative object.

Apart from the discussion of beauty and decoration, there is also a discussion of benefits and merits in various arts. Copper utensils have numerous benefits associated with the human body. So that if a bacterium is present in the food, after four hours, it completely disappears in the copper utensils and is referred to as a food disinfectant. It also balances the immune system, including hormones, and ultimately reduces depression.

Painted Copper is the art of painting and enameling on copper objects and utensils. A group of people considers this art as a subset of enameling. In fact, it can be said that copper and processing utensils have emerged from the combination of traditional handicrafts of Iran and enamel handicrafts. An innovation that has many fans these days.

Copper is a metal that has a high deformation ability. In this regard, if it does not have a high thickness, it may be recessed and damaged when colliding with other hard objects. Therefore, the first point in choosing a good copper and processor as a promotional gift is to pay attention to the thickness of the copper. 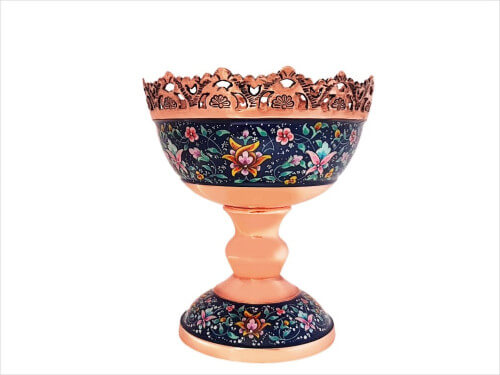 Copper can not withstand moisture and water and changes color (oxidizes) quickly. Therefore, it is necessary to use a liner or coating to take care of traditional handicrafts of Iran to increase their strength. Usually, the material of copper and processor is polyester.

Copper and process designs can not withstand high heat, so they are not a good option for cooking. These traditional handicrafts of Iran or promotional gifts can be used in catering utensils such as nuts, sweets, and… as well as in decorative items such as earrings and necklaces.

In the first step, the size of the copper and processor containers affects the price. The larger the size of your container, the more copper is used and the more expensive it will be. The thickness of the copper used in any handicraft based on copper is another important factor in determining the price of those traditional handicrafts of Iran. The thicker the copper, the higher the quality. Color and design quality is another factor that affects pricing. The more complex designs or colors are used, the higher the price of this promotional gift and craft. Keep in mind that small designs in handicraft containers are generally more expensive. 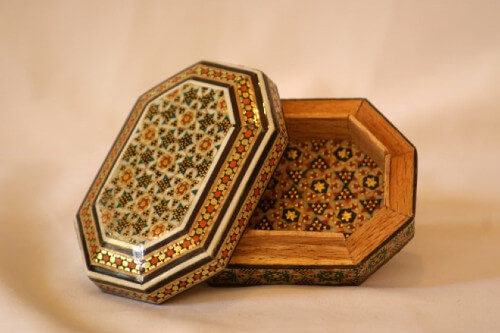 Khatam Kari is one of the most well-known and, of course, the most beautiful traditional handicrafts of Iran. In this art, the work surface, which is mainly wooden, is decorated with colored triangles of wood, bone, ivory, oysters, and metal. This art is flourishing in different parts of Iran, especially Isfahan and Shiraz. The art of inlaying has two main parts: the first part of inlaying and the second part of inlaying are called the initial stages of construction, up to the cutting stage, and inlaying is called the stage of installation until finishing and finishing work.

To produce Khatam products, various raw materials are used, which are: 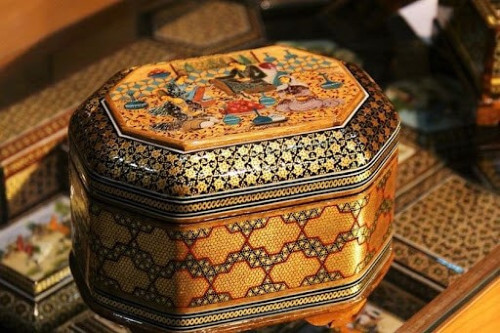 What are the characteristics of a high-quality inlay?

If you want to prepare the best and most beautiful traditional handicrafts of Iran, you can refer to the site https://grandhandicraft.com/ and make your purchase with peace of mind. Our team with a professional staff tries to provide the most beautiful and high-quality handicrafts in Iran.

what is the best Iranian souvenir?